Grant Allen and «The Woman Who Did»

«He is about as much the English Toltoi as Mr Maeterlinck is the Belgian Shakespeare», raged the English feminist M.G. Fawcett. Grant Allen wrote one of the most controversial books of the nineteenth century, a cheap novel that everybody hated, but which they simply had to read.

Wolf Island, the small island where Grant Allen’s father worked as a clergyman, is located at the north-east end of Lake Ontario. His mother was of aristocratic descent. Allen was one of seven siblings in a happy and well respected family. But then his father ran into difficulties with his local bishop, and Allen followed his parents to Massachusetts, and from there to France and England. His father made sure he had a proper education. The travels provided Allen with experience and a unique understanding of language, and in the end he studied Latin and Greek at Oxford while his parents returned to America. He married early to a sick woman who lay paralyzed in her bed for two years, and even if he later found the love of his life, he never forgot her. His most famous book, written two decades later, was dedicated to her.

Professor in Jamaica
The sun never set on the British Empire in the middle of the 19th century. It was the heyday of Social Darwinism and the ideas of Herbert Spencer. In Jamaica at this time a small college was established to teach the natives to be white, well, at least culturally. Grant Allen left university in 1871. For a time he «took perforce to that refuge of the destitute, the trade of the schoolmaster. To teach Latin and Greek at Brighton College, Cheltenham College, reading Grammar School, successively, was the extremely uncongenial task imposed upon me by the chances of the universe. But in 1873, providence, disguised as the Colonial Office, sent me out in charge of a new Government College At Spanish Town, Jamaica»

Suddenly he was offered a position as a professor of Moral and Mental Philosophy in Jamaica. Allen gathered his old chums, and celebrated what was to become a journey of disillusionment. The treatment of the local population shocked him, and he eventually came to despise British upper class morality. It was perhaps not so strange because there circulated rumours in the Jamaican press that he had fathered an illegitimate child.

A fan of Herbert Spencer
His professorship opened his eyes to philosophy, and Herbert Spencer’s evolutionary thoughts in particular. His father had most certainly introduced him to the ideas of the man who, even if he was a quintessential Brit, had become America’s favorite contemporary philosopher. At Oxford Allen’s interest had grown. At Jamaica his interest began bordering on admiration, and he wrote a poem in honor of Spencer, which he mailed to him. On his return to Britain he decided to pay the philosopher a visit, and this became the beginning of a permanent friendship. Allen wrote a thesis about the effect of evolution on aesthetics and he specialized in the link between perception and different physical characteristics in different species. Allen had a unique ability to explain difficult theories in such a way that they became accessible to everyone, and he was therefore warmly received by contemporary greats, like Darwin, Wallace, Huxley, Hooker and Spencer.

Almost a biologist
At the end of the 1870s Spencer had already followed his only love interest to the grave, and Darwin had become a private and revered authority that controlled the scientific societies from his Down House just outside London. The struggle for control of the science societies was over, and this seemed promising for young evolutionary biologists. But in order to make a living from science you either needed to come from a wealthy family, like Darwin, or you would have to be awarded an academic position, like Huxley. Even Wallace struggled financially. As a newly converted follower of spiritualism Wallace had lost scientific prestige, and he now survived almost exclusively on Darwin’s limitless generosity. If Allen was to provide for his new-born son, he needed to write something that brought him cold cash.

Almost a writer
Grant Allen settled in Dorking in Surrey, not far from London. His writings had already resulted in several literary friendships, so it was only natural that he would give it a try himself. But he had no illusions about the extent of his own talent: [As] it paid a great deal better than scientific journalism» he wrote ten years later «I decided me that my rôle in life henceforth must be that of a novelist. And a novelist I now am, good, bad, or indifferent».

Allen did create several memorable characters, such as Colonel Clay, a precursor to Sherlock Holmes, and for a decade he surrounded himself with writers like Meredith and Gissing. He was a familiar face at all the contemporary news desks, and established himself as one of the most prolific journalists in the business.

The age of queen Victoria was now drawing to a close, and new and more challenging cultural movements were taking hold in the thriving cities. Decadence, for instance, dismissed contemporary moralism and socialism challenged the aristocracy and the upper class. Workers and women marched, and the tabloid press constantly pushed the boundaries of what what could be submitted to the newspapers. Allen was caught up by these new movements.

In 1892, Allen moved from Dorking to a larger house at Hindhead. His old student friend Edward Clodd was a frequent visitor, and Allen was popular among the people of the press. Even if he suffered from chronic chest pains, he and his wife, Ellen, seemed like the perfect couple. Every Sunday he went for bicycle rides with his neighbor, Arthur Conan Doyle, and every Tuesday he would lunch with Frank Harris, the infamous tabloid editor. Spencer popped in now and again, but he eventually understood that Allen had outgrown him. There was no love lost between Spencer and the Fabian socialists. There was an unspoken disagreement between Spencer and Allen that would not become known until they were both dead. From a distance Spencer observed the developments that would transform the man who had been his closest ally into the most controversial man in Britain. 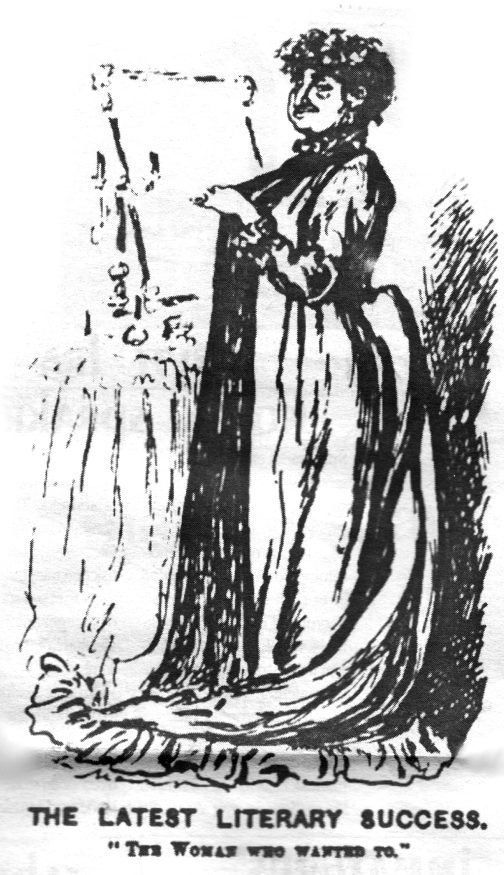 It all started when Allen, at the end of the 1880s, began to take an interest in the question of women’s rights. Women’s liberation had created a new kind of female who did not care for traditional values and who was often shunned by the elite. She was often an intellectual, something which, in the eyes of the establishment, reduced her femininity and made her sterile. When Allen wrote an article about «The Woman of the Future» the responses were immediate. Both female socialists and conservative Christians reacted to his many references to biological science. Even an ardent socialist like Wallace thought it was too much, and argued against Allen’s view of women because, as Wallace put it, sensuality was an important cause for the downfall of civilizations.

Allen had taken an interest in Darwin’s theory of sexual selection already in the 1870s. In his own articles he tried to show that emotions served an important function in the evolutionary process. This resulted in a deep-seated fear of any tampering with traditional gender roles and anything that might upset the natural order. In 1893, Allen went on one of his many trips to the North of Italy. He spent the spring writing a novel called The Woman Who Did, a short but controversial story about a woman who refuses to marry the man she loves because she sees marriage as an oppressive institution. She is brought down by her own convictions, and sacrifices her own biological needs. In the end, not even her only daughter respects her, and she commits suicide.

Financial success
On his return to England Allen tried in vain to find publisher. He was about to burn the manuscript when John Lane, who had an eye for controversy, decided to take a chance. There was a huge commotion from the get-go. Was his protagonist realistically portrayed, or perhaps the writer was insane? The novel was a bombshell. Did the writer try to defend women’s rights as he himself claimed, or was he a conservative? Was he defending promiscuity or marriage? Or did he, as one reviewer claimed, try to undermine the very foundations of civilized society?

The debate continued as new editions were printed. Booksellers in Ireland wanted nothing to do with the infamous blasphemer. Then the novel was published in America, and Grant Allen became an international celebrity. Also, he became wealthy. Satirical parodies such as The Woman Who Wouldn’t by Lucas Cleeve and The Woman Who Didn’t by Victoria Cross were published. In a very awkward way, Allen made himself a public enemy at the same time as he finally achieved a little prosperity. One of his closest friends, the historian Fredrick York Powell, lost patience with him: «Is Allen still frightened over his book? I tried to reassure him. There is nothing new or startling in it, but he has managed to catch the Philistine’s ear: it is silly to bother about answering his critics and he does not do it well. He is such a good fellow and so earnest, and so deaf to the comic side of things that he always has an open place to be attacked in- and it hurts him»

The hardworking Grant Allen was never able to rest on his laurels. The disease that had haunted him throughout his life gradually worsened. After a long illness with chronic pains Grant Allen dies in October 1899. He left behind one of the most talked about and least understood novels in English literature.