Mahakavi Laxmi Prasad Devkota, the most famous writer in Nepal 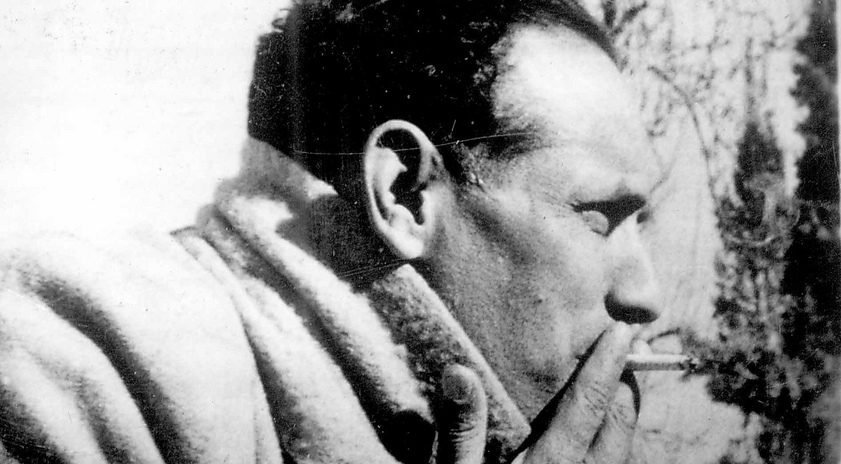 In Nepal every school boy knows the name Laxmi Devkota (1909-59), author of the short Napelese epic Muna Madan. All over Himalaya his works are revered as classics, yet in Europe and the West his folk inspired narrative poems remain largely unknown. In a special interview one of his two surviving sons, Padma Devkota, explains the continuing attraction of his father’s stories, and why a tale like Muna Madan still fascinates today, almost 100 years after it was written.

Historyradio.org: Why has Muna Madan become such a central work in Nepalese literature?

Professor Padma Devkota: Muna-Madan remains a central work in Nepali literature for several reasons. Briefly, it is the first major Romantic work in Nepali literature which revolts against the age-long Sanskrit classical tradition and seeks to tell the story, as Professor Shreedhar Lohani observes in “Life, Love, and Death in Muna Madan,” of real people through lives of fictional characters, and to fictionalize real geographical space. This is the first work in Nepali literature which elevates the jhyaure song, an otherwise neglected cultural space, to a significant literary height. Next, it tells a story of the common Nepali people which remains realistically contemporary in the context of the international labor market which still attracts many indigent Nepali workers. It is a heart-rending tragedy written in a simple diction which even the illiterate people of Nepal easily understood. They found their own lives written all over the pages of this book. Even then, Poet Devkota himself was criticized by elitist writers as having done something that would mar his literary career.

Historyradio.org: Muna Madan deals with issues like poverty and caste, to what extent are these issues in present day Nepal?

Professor Padma Devkota: The caste system is not a central theme of Muna-Madan. It is mentioned only once in the course of the story when Madan’s overwhelming gratitude to the Good Samaritan figure, the Bhote, causes Madan to mention his own caste. Furthermore, the caste system itself was efficient at the time it was created. Later practices cast a slur on its original intent, which was simply a division of labor within a small, ancient community. Quite obviously it has outlasted its use in contemporary societies and the Government of Nepal has taken efficient action against all caste discriminations. However, even as poets and thinkers point up the correct path, human habits die hard. We now fear the rise of economic castes such as those that encrust capitalistic societies. I believe Nepal, especially after its secularization, has been more successful fighting the discriminatory caste system than it has succeeded in fighting poverty.

Historyradio.org: Tell us a little about your father, Laxmi Prasad Devkota. What sort of man was he?

Professor Padma Devkota: Laxmi Devkota is popular as Mahakavi (Great Poet/Epicist). The public was quick to recognize the exceptional qualities of a poet whose fifty-ninth book, The Witch Doctor and Other Essays, a collection of thirty essays written originally in English, appeared on November 11, 2017. There are several other documents waiting to be published. He wrote in practically all the genres of literature and excelled in poetry and essay. Initially, he wrote under the influence of his Sanskrit background and English education. He started out as a Romantic poet in the Nepali tradition but continually grew as a poet to a literary modernity which the bulk of his writings have shaped. As an intellectual, he participated in the socio-political life of the nation, which he loved with all his heart. As a writer, he had vision, imagination and mastery over the medium. He also raised his voice against colonialism, imperialism, discriminations and injustice. As a thinker, he asserted the necessity of scientific and logical thinking to counteract blind faith and orthodoxy which hindered progress. As a human being, he had the gift of compassion and empathy. Legends continue growing around the life of the poet.

Historyradio.org: What kind of reception did Muna Mudan receive when it was published?

Professor Padma Devkota: Muna-Madan is a long narrative poem written in the lyrical form called jhyaure in which learned people of the time found, as Devkota himself explains, “a low standard of rural taste, an inkling of distancing from civilization or of showiness or trace of ill-manners of the hills.” He tells us how the pundits “started wrinkling their nose” at the mention of jhyaure. For them, the merits of literature were with Kalidas and Bhavabhuti, the classical Sanskrit poets. For Devkota, they were not national poets and their literary output was not the Nepali national literature. So, he compares his situation to that of his predecessor, Bhanubhakta Acharya, the Adi Kavi or the First Poet of Nepal. During Bhanubhakta’s time, the elitists asked if it was possible to write poetry in Nepali. But Bhanubhakta used the Sanskrit classical meter and produced wonderful poetry in Nepali. Similarly, in Devkota’s time, the elitists asked if it was possible to write poetry in jhyaure. Devkota elevated the status of jhyaure by writing serious literature in this rhythm of the common heart. Quickly, Muna-Madan gained popularity and it still remains the best-seller even to this day.

Historyradio.org:  There is a movie version of the novel, is this film faithful to the original text?

Professor Padma Devkota: I would have to look at the movie again to tell you just how faithful it is. When I watched it for the first time years ago, I thought it was sufficiently faithful to the original text, but that is just a passing claim. Gaps, additions and interpretations of the movie need a more serious revisiting.

Historyradio.org:  Could you describe the literary style of that your father uses in his narrative? Is he a realist writer, a naturalist? A modernist?

Professor Padma Devkota: Muna-Madan is a long narrative poem written with the ballad in mind. It uses a lyrical form called the jhyaure which was popular among people at work, especially in the paddy fields where young boys and girls teased each other with songs and fell in love. Although Devkota’s poem is tragic in essence in keeping with the eastern view of life, he insists on the importance of action, which alone can give significance to life. Throughout the poem, there are reversals of the imaginary and the real, of gender roles, of situations, and so on. The poem is romantic in vision, emotionally well-balanced and under full control of the writer. It uses fresh metaphors and images that have a lasting impression upon the mind of the reader. The work is popularly acclaimed as being simple, but simplicity of diction is counteracted by the poet’s imaginative flights that trail the syntax behind them. It is as if my father wanted to apply William Wordsworth’s famous poetic declaration in the Preface to Lyrical Ballads to Nepali literature: to write about real people in their own tongues. In trying to select a “language really used by men,” Devkota strikes gold and achieves a simplicity which stands in great contrast to the complexity he was later able to achieve in the epic language of Nepali Shakuntala, for instance.

In terms of its revolt against the classical tradition and its attempt to speak in the simple language of the common people, Muna-Madan is modernist too. It does make a very powerful statement against discriminatory caste practices.

Historyradio.org:  In which way does his novel fall into the narrative of Nepalese literary history?

Professor Padma Devkota: Nepali derives from Pali, which derives from Sanskrit. Very early Nepali writers wrote devotional poetry in Sanskrit; but Bhanubhakta Acharya decided to freely translate Ramanyan into Nepali using the classical Sanskrit meters. He also wrote a few poems about the political and social issues of his time. Then came Motiram Bhatta and introduced the Urdu gazal and wrote many love poems. Lekhanath Poudyal stuck to the Sanskrit tradition but wrote a Nepali that gleamed with polished language. Balakrishna Sama, a playwright and a poet, looked westward and to science and philosophy. Laxmi Prasad Devkota introduced Romanticism and Modernity to Nepali literature.

Briefly again, my father’s poetry is spontaneous, deeply felt, sincere and honest, and has a touch of spirituality in it. He loves his nation, but goes glocal. He finds his inspiration in the histories and mythologies of India, Greater India (Bharatvarsha), Greece, Rome and Nepal. For him, mythology offers a proper window into the hearts of the peoples of the world. For the human being must stand at the center of the universe. The human being is the only significantly worthy object of worship. And the poet remains a liberal humanist.

Historyradio.org:  Why do you think Muna Madan is so little known in Europe?

Professor Padma Devkota: No serious attempt has been made by the Nepalese Government to introduce its culture and literature to the Europeans, who don’t read Nepali anyway. And why should they? Nepal is not an economic or military giant. So, its richest cultural mine awaits discovery by individuals who wander in search of the best in world literature. Some such as Dom Moreas who met Devkota at his death-bed and reminisced him in Gone Away: An Indian Journal or David Rubin whose translations of Devkota’s poems appear under the title Nepali Visions, Nepali Dreams or Michael Hutt of the School of Oriental and African Studies (SOAS), London, who translated Muna-Madan are examples of Western scholars who have discovered him. More recently, international scholarship has grown around Devkota’s work. One such study, though peripheral to Muna-Madan, is that of Anna Stirr’s on “Sounding and Writing a Nepali Public Sphere: The Music and Language of Jhyaure” (Asian Music 46, 2015). Although Devkota himself started the tradition of translating his own works and those of his colleagues’ into English, and although he also started the tradition of writing serious literature originally in English, we have not been able to publicize it beyond the frontiers of our immediate neighbors.

Historyradio.org:  Are there many foreign translations of the story?

Professor Padma Devkota: Not as many as or as good as we would like to see. Some Nepali translators have attempted rendering Muna-Madan into English. Among them are my father’s brother, Madhusudhan Devkota, and Tirtha Man Tuladhar both of whom attempted a translation of this work in 1970. Ananda Shrestha’s rendering into English appeared in 1995. Foreigners, too, have tried to translate this work in their own ways. A. M. Syangden and Ganga Singh Rai form India attempted translating Muna-Madan in 1994 and 1996, respectively. Their major problem is with the language itself. Michael J. Hutt’s translation appeared in 1996. It remains the most noted version to this day. Liu Xian translated it into Chinese in 2011. Portions of the text have been translated into Russian, Korean, French, German and other European languages, too. All of them have translated from the original text of Muna-Madan, which is shorter by 399 lines from the text revised by the poet in 1958. This one remains to be translated by someone.