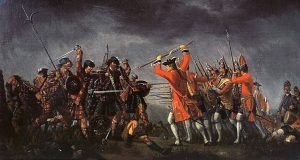 Long before Bob Dylan, the 18’th century Scottish poet and song-writer Robert Burns published an anti-war anthem. Surprisingly modern sounding (video below), the song rejects contemporary war mongering and focuses on the human suffering caused by conflict. However, in order to understand the historical context of the song, we do need an expert. We asked George Mcclellan, a director of the Robert Burns Association of North America, to set the scene.

Historyradio.org: Why was “Ye Jacobites by Name” written”?
Originally to condemn the Jacobite cause. It’s necessary to understand the period following the Reformation when Great Britain became firmly anti-Catholic after years of conflict. There were two periods of Catholic rebellion, The Jacobite risings, or the Jacobite rebellions or the War of the British Succession, 1688 thru 1748, the intent of which was to return Catholic, James Stuart II and VII, to the British throne and, their last attempt with “Bonnie Prince Charlie’s (Charles Edward Stuart) ending with his loss at Culloden in 1746. Jacobite is Latin for “James.”

Historyradio.org: Do we know who wrote it?
I believe the original tune was written by Hector Macneill titled: My Love’s in Germany. He was probably referring to the German House of Hanover who became the sovereigns of Great Britain following the reign of William and Mary.

Historyradio.org: Robert Burns re-wrote the song as an anti-war anthem? What sort of changes did he make?
Actually, Burns borrowed extensively from other authors, as well as fill in fragments long lost of many old songs. He did not plagiarize but rewrote or reframed ideas expressed by others to fit tunes from traditional Scottish folk songs, before they became lost forever.

Burns borrowed only the first verse from the original version of Ye Jacobites By Name that attacked Catholics from the political point of view of the conservative (and Protestant) British government, aka: the Whigs. Burns rewrote his version in 1791 with an anti-war outlook. His is the version that most people know today.

The tune for the lyrics was from a song titled Captain Kid (one ‘d’) and may have been a version of Put in All in ‘Pills’ written after The Battle of Falkirk Garland in 1746. Before Burns was born. Many tunes were written and published comforting the failed Catholic efforts and most were published in Ewan MacColl’s collection titled Personal Choice.

Historyradio.org: How was the song received when it was published by Burns, with the tune added?
Little remark has been recorded as to the songs first appearance. Enough Catholics still existed as neighbors to have been offended when publicly sang. The pro-monarchy pub crowd probably liked it, as they did most things Burns did.

Historyradio.org: The song has a pretty strong political message, at what sort of events would it be performed?
Except it be in a pub or ale house, it would not be performed like we understand performers do today. In your face songs would have been punished not glorified. Politics of the time could be deadly if one stood against the Crown. So, public demonstrations of the tune, outside of pubs, etc. ,simply didn’t occur.

Burns wrote it. It was published in Johnson’s Scots Museum and received little notoriety except to confirm Britain’s religious conversion from Catholicism to Protestantism. In Scotland in Burns time, it was the Calvinism of the people vs. Anglicanism (Church of Scotland) of the Govt.

Historyradio.org: Would you say the song has had any influence on Scottish history?
The song, No! Culloden (Protestant government forces vs Catholic pretender) had the greater influence on Scottish History by killing all pretense that a Catholic Stuart would return to the throne of Great Britain. It also killed the Highland Clan system, mostly Catholic, forever.

Clarifying why such a song should be important is to understand the Jacobite cause. Charles Stuart’s Jacobite army, largely composed of Catholics and Episcopalians, but mostly Highland Clans, with a small detachment of Catholic Englishmen from the Manchester Regiment, plus some Irish, represented a return to old feudalism. Charlie’s effort was supported by France, with some Irish and Catholic Scots military units in French service, to support the Stuart claim.

The British Governments Hanoverian forces were Protestants, English with a significant number of Scottish Lowlanders and some non-Catholic Highlanders. The results of that complete and disastrous rout are well known, but it ended the Clan system and took Scotland out of the past and pointed it into the future.

But deeper economic motives however, lie hidden as causal effects. England and the Scottish Lowlanders were moving into an industrial age of unprecedented prosperity and growth. A return of the Stuarts would mean a return to feudalism and they weren’t having any of that. Advances in agricultural production and world trade was enriching even the crofters in the Lowlands and the Industrial Revolution was just around the corner. No, a return to feudalism would have ended all that.

Culloden’s aftermath did arouse strong feelings for a long time and the original song contributed to that so Burns rewrote the lyrics to temper down ill feelings because he recognized all Scots as kinsmen, “Brothers be for a’ that,” not enemies because of religion. Remember too, Burns had his own private religious war (with words) against the Scottish Kirk too. Too, Burns was more than emphatic to the lost Jacobite cause as revealed in several pieces he wrote on his first tour to the Highlands.

Burns understood his own family’s history in the religious conflicts that preceded him, and was proud that his ancestors sided with the persecuted rebels of the Covenanters on his mum’s side and the Jacobites on his fathers side. Burns was particularly aware that the final results of the Scottish religious wars, and the collapse of Catholicism, rendered his fathers family near the poverty level. Burns referred to it as Jacobite “Ruin”and, it did adversely affect his fathers course through life. Burns was also proud that his father recovered, gained an occupation (Gardner) and survived. It was an awful period of time for the people of Scotland.