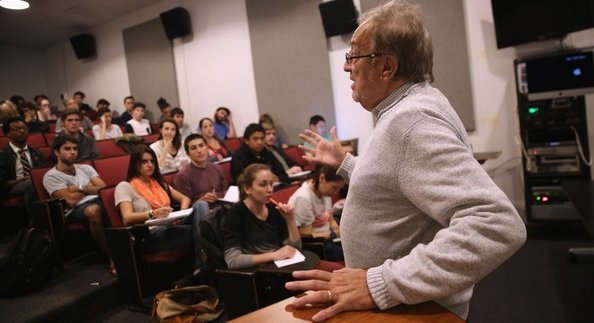 Making it as a script writer in Hollywood is not easy. There is a whole support industry for creating stories, classes on almost every corner in Tinseltown. One of the more dedicated teachers of the craft is professor Ken Dancyger of New York University. We spoke to him about his work as a teacher of writing, and about the realities of the business.

Historyradio.org: When did this notion of a “script guru” become common? What sets such a person apart from, let’s say, a professor of literature?

Professor Dancyger: The “script guru ” for me started with Syd Field. I remember going to see him in Toronto along with 400 others and being outraged by his ideas about scripts. He made me define where I stand on the vital issues about how to write a strong script. At that point I myself had written, alone or with partners, 10 scripts. The first secured me a Hollywood agent, the second sold to Canadian television. I seemed on my way.
A script guru is very different from a Professor of Literature. A Professor of Literature is well-read and has an area of interest. He or she may or may not be a novelist. Script guru is much closer to the popular arts i.e. the media. Certainly the guru may borrow ideas from literary critics such as Northrop Frye but his or her knowledge base is strongly rooted in the hundred plus history of Film. The earliest writers about script were often playwrights and so ideas about plays, their structure, was much more likely to influence Script gurus than Academic Professors of Literature.

Historyradio.org: They must get their ideas from somewhere? Do you read a lot of academic literature, and then translate this into practical advice? Or have you done the empirical work yourself?

Professor Dancyger: I read a lot of history as well as literature and see many plays and of course I see every film I can, always with an eye to what makes the work compelling. The scripts I’ve written, the writers I’ve worked with, the classes I’ve taught are all laboratories where I define and refine my ideas about storytelling and what constitutes a strong screenplay.

Historyradio.org: If you were to give a little praise to one of your colleagues or competitors, who would that be, and why?

Professor Dancyger: I like David Howard from USC and Judith Weston who teaches acting for Film and Television. David is very good on character-driven stories and Judith is excellent on character arcs and their importance. Both have written strong books.

Historyradio.org: The late Syd Field was famous for his 3 act-theory. Robert McKee also presents a lot of rules about what constitutes a good script. What is your main dictum on how movie scripts should be constructed?

Professor Dancyger: My approach is as follows: In a feature length screenplay a character changes. What is the issue (crisis) when we meet the main character? How does the character change by the resolution or end of the screenplay? Who/what changes him (relationships and plot)? Next what will the dramatic arc (plot) be? Every genre has a different dramatic arc. What genre is your story? Genre is pliable in terms of how it is used. What tone will you use? (light, realistic,dark). Will you alter any genre expectations? (How you begin or end, the nature of relationships). Screenplay that succeed often surprise is in our expectations. Will your screenplay defy our expectations?

Historyradio.org: Can you really create a norm for what a good script is? If you look at prose, some writers excel on plot construction, like Agatha Christie, others on their poetic qualities? Wouldn’t the same thing be true for a movie script?

Professor Dancyger: There is a norm for expectations of what a script will be. This is based on how particular story forms have been used over time. Writers differ, some are strong on plot, others on character, yet others on dialogue. Robert Towne is very good on dialogue, David Rayfiel is very good at story construction, Francis Coppola is very good at tone. Each is unusually gifted in their area but few writers are good at every thing.

Historyradio.org: What is the best way of breaking into the hollywood script business? Do you just email your script to someone? Or do you need to know a lot of people in order to make it?

Professor Dancyger:  Working in the business at all levels is the way into a career. Schools help as you can make a good short film that will get you attention. At that point the door may well open for you. Have a well written feature film script written. That too will help.
At the moment CONTENT is king in Film and Television. The opportunities are abundant. It remains tough but this is a good time for writers.
I have seen European writers and directors go from a nominated foreign film to a Hollywood opportunity. This is the competition students who graduate from Film Schools face.

Historyradio.org: When your script has been bought, it may be reworked by someone else, might it not? So the end result doesn’t really have to look anything like you originally intended? Isn’t this frustrating?

Professor Dancyger: The realities of the industry is that many voices will impact your script, in both Film and Television. It might be frustrating but my advice is get over it. Its the way of this world..

Historyradio.org: When I was a student, my professor told me a story about the Irish Nobel laureate, Samuel Beckett, and how he was rejected many times, only to become famous as a mature man. At what point should one give up, and simply accept the fact that perhaps one’s talent isn’t sufficient for a career in Hollywood?

Professor Dancyger:  Persistence is more valuable a trait for a writer than in many fields. There is no one path. Everyone has talent, not everyone is persistent.

Historyradio.org: You must have read thousands of scripts, what would you say is the most common mistake that young or novice writers make?

Professor Dancyger: The most common mistakes early writers make are, in order:

Historyradio.org: What is the best movie script of all time, and why?

Professor Dancyger:  The best movie script of all time is a tough nut. I have many favorites:

I could go on but will stop…