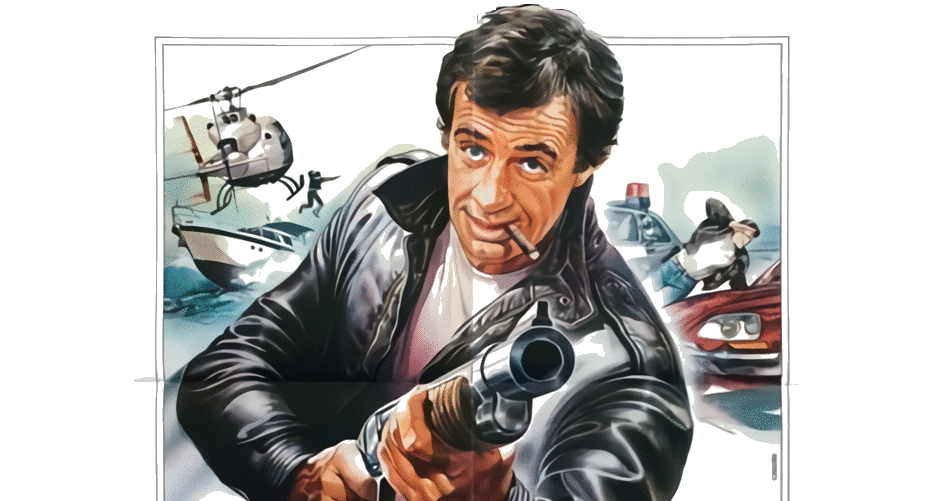 In 2008 Radio Prague covered the publication of a new Czech book about Jean-Paul Belmondo (1933-2021, he passed away a few days ago). Their brief report described Belmondo’s unique standing in the old Soviet-bloc country; the only major, western action star to gain a foothold behind the iron curtain during the Cold War. Through him a generation of Eastern Europeans got to experience capitalist action flicks.

Among hipsters around the world today Belmondo is sometimes elevated to a rugged icon of snobbish intellectualism, through the early films of the Nouvelle Vague-movement. But in Eastern Europe he is remembered as B-movie royalty, the macho man with a twinkle in his eye.

Of course, it was Jean-Luc Godard’s À bout de souffle (1960) that became his break-through, but in many ways his collaboration with Phillipe de Broca (1933-2004) was just as important for his future career. De Broca had been a film photographer during the war in Algeria, and became so disillusioned by the events he witnessed that he decided to make more cheerful and uplifting movies. He started out as an assistant for a few Nouvelle Vague directors, but changed paths and made comedy farces when he established himself as a director. His two producers, Alexandre Mnouchkine and Georges Dancigers, suggested Belmondo for the role of the brash swashbuckling Robin Hood-character Cartouche. A few years earlier they had produced the adventure classic Fanfan la Tulipe (1952) with the legend Gérard Philipe in the lead, and now de Broca bet on Belmondo to revive the swashbuckling genre.

Cartouche (1962) was an instant box-office hit, and two years later that success was followed by L’homme de Rio (1964) – an action-packed contemporary adventure about a soldier (played by Belmondo) who pursues the men who kidnapped his girlfriend from Paris to the Amazonian jungles. The Oscar-nominated movie features a series of spectacular action-scenes, and de Broca declared in an interview that the movie was made because “he needed a hit”. His producers had only been reluctantly swayed, and he had spent five months finishing the script. The result was satisfactory, even to himself, but the film was by no means a favorite for de Broca among his own productions. He said: “This was the kind of movie I longed to see when I was 14”.

As a director, de Broca often took a hands-off approach to his actors, and Belmondo tended to follow his instincts. “Belmondo will always be Belmondo. You cannot change him. You cannot hide his personality. When he plays a drunkard, he is a drunk Belmondo. When he is in love, he is Belmondo in love.” (de Broca in Gardner 1969-70: 153-157). Belmondo’s charismatic self shone through, especially in B-movies like Tendre voyou (1966), Flic ou voyou (1979), Le cerveau (1969) and L’as des as (1982). The two latter were action-comedies by Gérard Oury, France’s pre-eminent comedy director, most famous for his collaboration with the hilarious genius Louis de Funès.

In the 60s and 70s, Belmondo became affiliated with the commercial side of French cinema. Godard and Truffaut ruled the film festivals and the student-bodegas, but ordinary Frenchmen rushed to the cinemas to experience the shenanigans of Louis de Funès and the hazardous stunts of Jean-Paul Belmondo, his broken nose and seductive smile. To critics like Pierre Maillot, however, Belmondo represented the “disillusionment” of French identity because so many of the models for genre movies were American.

Two of the great “golden ages” that have supported the self-esteem of French cinematic culture have been the poetic realism of the 30s and 40s and the Nouvelle Vague (“New Wave”) of the 50s and 60s. As a major star and the leading man of the Nouvelle Vague Belmondo therefore became the natural successor to Jean Gabin, the icon of the 30s. But where Gabin had acted tempered and cool – often under dire circumstances – Belmondo would burst with joie de vivre. There was a generational gap between parents in the 1950s and the new rebellious youth. The young wanted more than traditional French values, they needed happy endings. The vulgar neon-lights of Hollywood and Las Vegas beckoned in the distance. Belmondo grew out of the Nouvelle Vague into a new commercial reality.

The Armenian-born Henri Verneuil (1920-2002) was a director unconvinced by new wave-ideology. The Belmondo we witness in Verneuil’s movies was rougher, the soldier in the second world war, the tough criminal and the uncompromising cop. The inspiration for Peur sur la ville (1975) was probably Clint Eastwood’s Dirty Harry. Belmondo plays a policeman pursuing the serial killer Minos through the streets of Paris – in stylish cinematography. The Belmondo we see in this movie is not his usual careless self, the lives of young women were at stake. A contemporary reviewer called it “a tough and ruthless movie”. The newspaper stated that “It was impressive to see Belmondo dangling in a rope from a building, jumping between roof-tops several floors above the asphalt and making subway journeys on top of the cars. Because Belmondo has no stuntman…” (Aftenposten, 06.02.1976)

Belmondo also kept a serious face in the gangster movies Borsalino (1970) and Le voleur (1967). The latter was directed by Jacques Cousteau’s old cameraman, Louis Malle, today one of the major names in the history of French cinema. In Le Voleur (1967) Belmondo shines as an actor. He penetrates the mind of a professional thief. He persuasively portrays nerves of steel and deliberate theft. According to the contemporary press Belmondo used all his tricks, “his whole range of charm”. Like Belmondo, Malle would transcend Nouvelle Vague conventions, and create a memorable genre movie aimed at the masses, based on a novel, quite contrary to contemporary ideas about the “auteur”.

Belmondo was therefore not only an actor who drifted from art into commercialism, he was a personification of a suppressed part of French cultural history.

There existed another France alongside Godard and Truffaut and the other Cahiers-directors, a cinematic culture unashamedly modeled on Hollywood. Belmondo, that first ingratiating face of the Nouvelle Vague-movement, became the major box-office draw of this “other” France. He was just as charming as Roger Moore, and – at his best -adventurous to the level of Harrison Ford.

Note: This article was originally published in the Norwegian movie review Montages.no by Michael Henrik Wynn 30. januar 2014. It has been translated by him and published at this site with the consent of Montages.no.