New light on the mystery of Angkor Wat 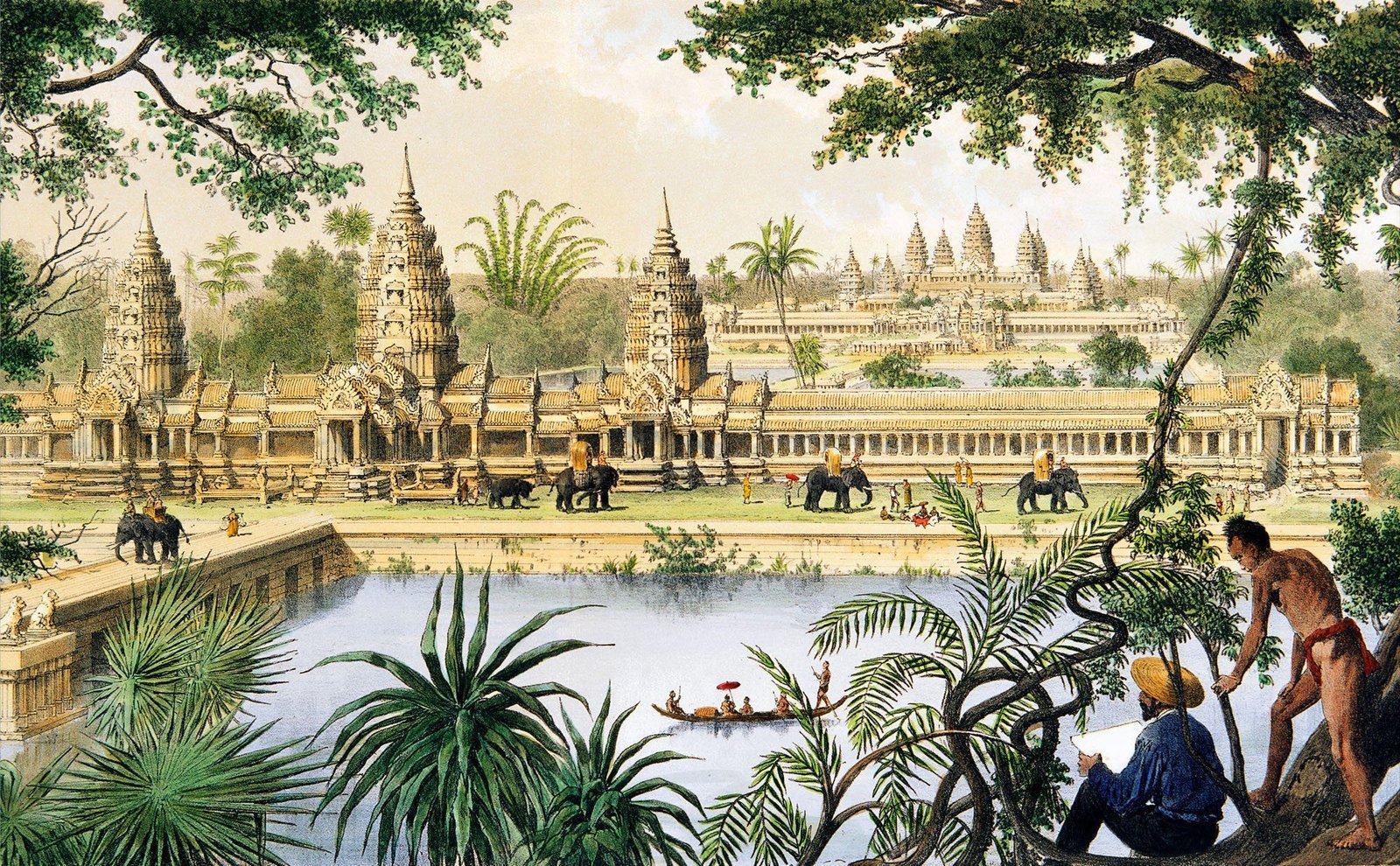 The ruins of Angkor were long hidden by the Cambodian jungle. Early explorers  such as the French artist Louis Delaporte (1842-1925) sketched the glory of what they found. Little did they know that the past was even more magnificent than they imagined. Just over a hundred years later, new laser technology, or lidar, is able to strip away the overgrowth of centuries, and bring to light a clearer outline of  that lost civilization. Now we can finally begin to understand what Angkor was and why the empire faded. Much still remains a mystery, but we were able to get some preliminary answers from dr. Damian Evans of the French Institute of Asian Studies (EFEO).

Historyradio.org:  In what way does your new Lidar findings expand or confirm the view of Angkor presented by Zhou Daguan in his 12’ century travel narrative?

Damian Evans: There has always been a degree of uncertainty about the urban context of the temples, because it was made of perishable materials which have rotted away. However Zhou Daguan mentioned a system of residence in which multiple households were arrayed around communal ponds. Using the lidar we have identified patterns in the ground surface that we can identify as remnant traces of ponds, and earthen occupation mounds on top of which people built their houses. We’ve mapped a vast network of these features, several thousand of them, which essentially confirms the account of Zhou Daguan as it relates to residential patterning.

Historyradio.org: Marco Polo speaks of a great empire in Asia (not China), is there any chance he might have mentioned Angkor?

Damian Evans: There’s no evidence for that unfortunately. The Khmer Empire was one of many large political entities which flourished in the region at that time, so it’s not necessarily the case.

Historyradio.org:  What was the population of an average city in the Angkor Empire and what was the total population?

Damian Evans: For population estimates we need to know two things: the spatial layout of the settlements, and the density of the neighborhoods. We have only just recently come to terms with the layout of the cities using lidar and other mapping techniques, and figuring out the density of inhabitants per hectare is the domain of household archaeology, which has really only just begun at Angkor. So we haven’t yet had the opportunity to sit down and make precise calculations, and we are still missing some crucial information. We can say though that figures in the one million rage for a population of Angkor are probably way too high, and I would say that there are several hundred thousand people at the capital, and some tens of thousands of people at each of the major regional centres.

Historyradio.org:  What was the most surprising thing that you discovered?

Damian Evans: There are still quite a few features that we discovered that we don’t understand. There are large grids of mounds covering several hectares, and strange geometric shapes carved into the surface of the landscape. They don’t seem to have had any agricultural or residential function, and when we excavate them there is nothing inside, so they are not burial sites. They may have some larger symbolic meaning as geoglyphs or something, we don’t know. Work on that is ongoing, as they have turned up everywhere and were obviously an important component of the built environment, and perhaps also of a kind of sacred geography whose meaning is obscure to us.

Historyradio.org:  Has this form of archaeology uncovered anything new about the lives of ordinary people in Angkor?

Damian Evans: Not directly, no, aside from confirming the residential patterning. One of the great values of lidar though is that it provides a very detailed and comprehensive picture of the built environment that allows field archaeologists to target excavations very precisely on areas that we know will deliver the most useful information. That work will now begin to deliver a wealth if information about the everyday life of the people. The insights from lidar are more orientated towards large-scale factors such as water management, landscape change, the structure of the urban environment, that kind of thing. One thing we can say is that people were living in a very densely inhabited space in the downtown area of Angkor, and with a lack of sanitation disease must have been an extremely serious issue.

Historyradio.org: Why are there so few traces of this empire in the historical sources?

Damian Evans: There is a local tradition of carving inscriptions in stone, and there is a corpus of around 1300 of those inscriptions. It is a rich historical record that informs most of what we know about the Khmer. In terms of accounts from outsiders, early sources are very few and far between so there are huge gaps in our knowledge. Later historical sources in the medieval period are very trade-centric, and are dominated by European accounts. Societies heavily engaged in commerce and/or located in coastal areas to take advantage of maritime trade are heavily privileged in these accounts. Angkor was engaged in trade to a certain extent, but it was most of all an inland agrarian empire and not of great interest to traders and trade emissaries, with the exception of Zhou Daguan.

Historyradio.org:  Why and when did Angkor disappear?

Damian Evans: It’s a complex question, there are many theories to do with war, overextension of the empire and so on, but none of the theories really stand alone as sufficient explanations. Increasingly we are seeing that their water management system evolved over centuries in a way that was problematic and ultimately unsustainable; because it was crucial for the success and maintenance of Angkor as the capital region, when the water management system ultimately failed – perhaps in the face of extreme climatic events – the royal court decided to relocate towards the coast and re-orient the economy towards commerce.

Historyradio.org:  If Angkor had such extensive building complexes, canals and waterways, isn’t it natural to assume that they were advanced in the fields of science, mathematics and engineering? Do we know the names of any prominent scientists from the Angkor period?

Damian Evans: Not really, no, although there are mentions of some specific professions like architects who seemed to be quite prominent within the royal court. The inscriptions in stone that are our main historical sources are not really informative on such kinds of issues, as they are mostly poetic dedications to the gods which glorify the rulers and list donations to the temples. So we know very little of the mechanics of how things were built and why, and by who. Looking at the extremely precise way that the temples were built however there would have been a cohort of professionals who were very skilled in these fields, and who had the benefit of thousands of years of technical knowledge inherited from China and India and beyond.

Historyradio.org:  What sort of language did the ancient Khmer have, and are there any remains of their literature, either in their own language or in translations in other languages? If not, why not? After all ancient Greek sources often survived in Arabic translations?

Damian Evans: They had their own language which is the ancestral language of modern Khmer, although they had no indigenous script and expressed it in writing in a script that was borrowed from India. The language is intelligible to scholars. The high language of religion and the royal court was also borrowed from the Indian tradition – it was Sanskrit, which of course can also be translated easily enough. The corpus of 1300 or so inscriptions has been mostly translated into French.

Historyradio.org:  The lidar technology that you used has been applied most recently on the ancient Maya. Is there any room for improvements in the technology? What will be possible in the near future?

Damian Evans: At the moment the technology is still very expensive. In the future, as lidar instruments become miniaturised and as UAV technology develops, we should start to be able to cover wide areas with that combination. For now though it is not practical to cover wide areas on the scale of Angkor for example with UAV technology. But that will come soon I think in the next few years. Unfortunately there are technical limitations which prevent high-resolution space-based lidars. But in a decade or two we might achieve that as well, which will provide cheap global coverage. The amount of archaeological material that will be uncovered then will be extraordinary.