Reflections on the teaching profession 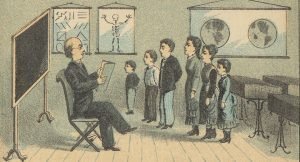 When I was a young pupil I used to mock my teachers. I copied their mannerisms, their voices, their flaws and particularities, and ridiculed them behind their backs. It was a way of entertaining family and friends at social gatherings. I took great pride in my acting abilities back then. I seem to have lost this talent over the years.

I remember one of my teachers in particular, a stocky man who always wore a blazer and a vest. His hands used to shiver to the extent that he was unable to place a key in the classroom lock. We all suspected drinking, and I impersonated him often. I don’t remember him as a great intellectual, although he did write a history of something once, but he had remarkable singing voice. When he sang, his crooked spine became erect, he gained an inch in stature and his powerful, manly baritone filled every corner of the room.  I don’t remember much of what he taught me on the blackboard, but his songs echo through my mind to this day. They were traditional English songs, “on ilkley moor baht at” and “Greensleeves”, and now many years later, I realize that he was in some ways (by culture, if not by birth) an old-fashioned English gentleman, almost an anachronism. As for his alleged drinking problem, he one day revealed to the class that he had suffered from polio as a child. This and not alcohol, was the cause of his ever shaking hands.

I did have other teachers, however, who might have been a little too fond of the bottle. Some were even sad characters. However, they all got up every morning, braved their limitations, and placed themselves at the scrutiny of brats and ungrateful teenagers such as myself. Then one day it was all over, and I attended the cold analytic world of the university, eventually becoming a teacher myself.

I really struggled during my first years in the classroom. Because I was new I was forced into the role of a drifter, accepting temp jobs all over the country. I was well received by my pupils, but I was not a credit to my profession.  This warm reception I attribute to my youth, and the fact that I was only slightly older than my students at a time when so many teachers were in their 60s. In the end I quit teaching.

A teacher must be a very organized individual. And yes, a great, powerful voice, like that of my old English teacher, will help you command respect. But there was something more that was needed which I lacked, namely the ability to study the progress of 100 students with the meticulousness of a natural scientist, taking notes, making judgments and rectifying errors. I was simply too sloppy. I guess, like many, I was slightly lonely as a child, and somehow I expected my own teachers to fix this problem. However, I eventually realized that only very rare individuals, and certainly not me, have the ability to intervene in the personal lives of others. This is not to be expected. I realized that as an adult, standing in the shoes of the men and women I once ridiculed.

Instead, I am now grateful for the efforts that my teachers did make, for they were considerable. What I felt and what I thought at that time has since either been proven wrong, or become irrelevant. I have a CD with old English songs. Whenever I have a drink by myself, I play it. It is very comforting, somehow.