Writing without an ego, a showrunner explains 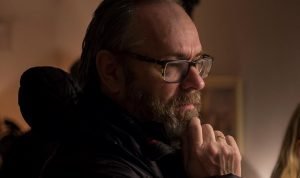 When you think of writing most people imagine a solitary philosopher, an ivory tower, or something of the kind. However, there are some, who for commercial and practical reasons, create stories in a group. These are the showrunners, the men and women who build the stories behind our TV series with detached and sometimes cynical eye. I have talked with one such man, Arne Berggren, whose resume in Norwegian and Scandinavian TV drama is too long to mention here.

Historyradio.org: I thought writing was a solitary job? I thought it depended on the genius of individual minds? Why am I wrong?

“For for most writers their job is a solitary one. Those who write fiction, for instance, are almost loners, I guess. How many of them that are geniuses, I cannot say, but there is definitely something dysfunctional about many of them. Something that perhaps makes them less suited for teamwork, that is my belief. Many writers consciously try to remedy some personal flaw through writing, or try to discover things about themselves. Often people like that have strong egos and like to follow their own train of thought and impulses, rather than conforming.

But many writers also find that it is liberating working with others. No matter how smart or brilliant you may feel, they see that more minds can achieve more together than on their own. If you want to write for TV, the process is so centered on deadlines that it becomes an industry or a craft. Volumes of pages need to be produced in a short period of time. Some get a little kick out of the fact that they share this responsibility rather than taking on the burdens themselves. In a group you can produce TV scripts fast , and I suppose that is why the whole idea of so-called Writers’ Rooms emerged. TV is an industry, and that implies process and teamwork.”

Historyradio.org: How exactly does the writing process work, do you sit around a table and brainstorm? When is the actual writing done?

Berggren:
“All Writers’ Rooms are different, and there isn’t an extensive tradition for this kind of work in Europe. When you write comedy, however, it is quite common to sit in groups and brainstorm. But in drama too we see more and more of this kind of work. In our company, Shuuto, we have a joint session in the preliminary stages, in which we test vague ideas. It is important that we move beyond brainstorming at this point, and when there’s a pitch, something that resembles a dramatic premise, we try to work our way to potentially interesting characters, look at the longer storylines and so on. What, for instance, are the worst things to which our characters may be exposed?

Eventually we get round to the actual writing of the scripts. On those occasions we are generally four writers in a full-day session, once a week. We delegate, and the script producer decides on shorter meetings, if they are needed. So the actual writing process is still solitary, but the script producer or the showrunner are never far off. There might be daily deadlines for scripts that are reviewed and then rewritten. It is a very organic process, but the workload may be heavy. We like to take our time in the preliminary stages, but then we produce scripts for one episode a week.”

Historyradio.org: There have been many story factories in literary history. Some say Shakespeare might have run such a factory. Dumas is another example. Still, both Shakespeare and Dumas got top billing. Isn’t there sometimes a clash of egos?

Berggren:
“Where there are writers, there is always a clash of egos. But you won’t last long in the TV-business if you create a lot of conflict wherever you go. As manager I have learnt to compromise, I think. I am looking for writers and a staff that are productive, with an ability to work things through. This creates positive vibes, I think.

I must admit that I haven’t always been a role-model in this regard myself. But one learns by making mistakes, and I try my best to help others. Some of the most famous American showrunners have been strong egos. Even so, they have created environments in which others could flourish. There aren’t any showrunner academies in Scandinavia, so it is a trial by error process. You need to search out people with a certain set of qualities, and create a relaxed work environment with as few egos as possible.

The writers need to understand that this is not about them, but about getting the job done. Their job is simply to assist the showrunner or the script producer, to make his or her life easier. So they are free to return to their “ivory tower” as long as they deliver on time.”

Historyradio.org: So how should the public think about you? Are you a company executive, a writer, a brand? What?

Berggren:
“I am slightly schizophrenic, I guess, split between being a writer and an executive producer. I still write books and theater, but as a TV-guy I am first and foremost a producer. If there is a brand, it must be Shuuto, our company. We don’t really concern ourselves with core values and strategies of communication. In fact, we have a hard time defining what we do, except for the fact that we produce script-based content in a slightly different way than the larger production companies and book publishers.”

Historyradio.org: What does it take to make it as a writer in TV, do you think?

Berggren:
“You need to write, write and write. And in between read and watch tv. Sometimes I must admit I am a little shocked by young writers who want to get into television, and who produce nothing. You cannot wait for a break. In fact, it’s all about actual writing experience. Even if it is difficult to write something without seeing the final product, this exactly what you need to do. Write in all genres, and get as much feedback as possible, if only from your mother or someone you know. And you need to watch a lot of TV, in all genres, several hours a day. You need to analyse how the the skilled minds think. Sometimes you can learn even more by watching half-decent drama. You see what’s wrong, notice the way they think, and when it doesn’t suit your palate you imagine what you might have done if you had written the story yourself.”

Historyradio.org: Norway is a small country, yet recently our TV series, actors and directors have made it in Hollywood. Are there international opportunities for script writers?

“Yes, I think this might happen soon. Already a select few have been offered seats in writing rooms in LA. Some might get a job, and it’s much harder than you imagine. You need to be proficient in English, and this is where many Norwegians tend to over-estimate our own skills. I think you can get an entry into the US market if you become a co-producer on remakes of Norwegian TV-series, or work on developing new series for the international market. Or you could move to LA or England, get your education there, network, become a part of the scene, as much as you’re able. We have had foreigners with Norwegian as a second language in our writers’ rooms here in Norway, and I can tell you this wasn’t easy. No matter how great they think their language skills are.”

Historyradio.org: Let’s say I were a 20 year old who desperately wanted to write something for TV or film. What would be my best option for achieving my goals?

“I would be very patient. Try to get a foot in the door anywhere on set. Be a runner. Make coffee, sweep the floors. Staple the scripts and so on. I would have done it for free, even if our unions might object. Once you have access, relations are built, gradually trust is gained. If you’re the sort of fellow who listens to criticism, thrives on it, more responsibility will eventually come your way.

But in terms of cognition, you need to remember that the 20 year old brain is, in fact, not fully mature. That doesn’t happen until you reach 25, I think. What you believe the world to be as a 20 year old might be false. A 20 year old is impatient, and wants to been seen and recognized. They think things revolve round them. I have seen plenty of 20-year-olds who were presented with great opportunities, but who were swiftly disappointed, told everyone to go to h.. and moved on to what I assume were greener pastures.

I guess, I once was a little like that myself. I have missed out on opportunities myself, you see. But “patience”, “networks”, “relations” and “trust” are the keywords. Most people are hired by someone they already know. And of course networking among people your own age is crucial. Someone that you know is sure to make it, and they will be searching for people their own age to join them. It is , in my view, almost impossible to predict who makes it. But their shared characteristics are gaining work experience, building relations and networks. So if you know “a mingler”, latch on.”

Historyradio.org: As the head of a writing group, you must have seen many mistakes, and many who lacked the skills. What are the most common mistakes of the rookie writer?

Berggren:……..
“They’re impatient. Afraid of criticism. You think that your way of thinking is the only one. Some lack humility. Some are lazy. Some are thin-skinned. Some jealous. Some believe themselves to be smart and that they deserve to be discovered. This is fact typical of 9 out 10 writers that we encounter. Great ego, inflated view of their own skills.”

Historyradio.org: I am going to ask you a difficult question that concerns most writers and artists at one time or another. How should one deal with rejection?

“This might sound like BS coming from some one with one foot in the grave, but embrace your rejections. The people I truly admire have one thing in common. They have been rejected more than most. You’re fired. You’re humiliated. And every time you learn something that makes you a better writer and better person. Rejection is the scariest thing I know. It hurts like hell, it hits us right in the gut. Still, it is the key to progress.

If you manage to put on a brave smile and move on. Rejections are not about You. The person rejecting you might be looking for something completely different. Often you will be offered new jobs from the very same person who once rejected you. As an employer I am looking for someone who is able handle themselves professionally. Patience. Humility. This can only be achieved by coming to terms with rejection. I know it sounds like crap, but this is something I know to be true. I have experienced plenty of rejections myself.”