Brian Paone, a man for all seasons 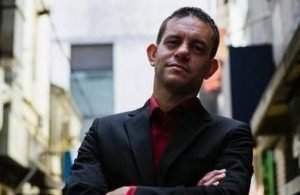 He’s the creator of a Facebook writing group with 27,000 members, an author, a father of four, a musician, and an officer of the law. Brian Paone is definitely a man for all seasons. A native of Massachusetts, he left the Bay State and settled in North Carolina. From New Bern he controls a group of aspiring writers on Facebook with a membership that almost matches the number of inhabitants of his home town. So what does he have to say for himself?

Historyradio.org: Why did you create this huge Facebook group? Is world domination your ultimate aim?

Historyradio.org: Why do you think so many have joined your group?

“Word of mouth, we offer an opportunity to be traditionally published in our Of Words anthologies, we keep spam off the page, and monitor the traffic very closely so the discussions stay focused on writing.”

Historyradio.org: What would say is the most common problem that an aspiring writer faces? Is it the language, plot construction, the premise of the story, what?

“Marketing and promotion. They think, just because the book is finished and is now listed on Amazon, that their job is done. When in fact, if you want anymore more than your mother or Uncle Bob to read it, your job has just started.”

Historyradio.org: As a writer, who would be your role-model, and why?

“Stephen King. With 75+ titles published, the legions of fans, and the ability to churn out high-quality novels year after year, is a true testament to his skills”

Historyradio.org: Describe “A Journey of Words?”

“It’s the 3rd book in the Of Words series, which is a yearly anthology that my publishing company releases that includes authors from all over the world. A Matter of Words was the 2015 book, A Journey of Words was 2016, A Haunting of Words was 2017, and A Contract of Words will be 2018. Each book has anywhere between 21 – 35 stories from different authors.”

Historyradio.org: You’re a musician and policeman as well as a writer, and a father of a large brood, how on earth do you find the time?

“Sleep is for the weak”

Historyradio.org: This band of yours, Transpose, is it any good?

“If you enjoy bands like the Deftones and Thursday”

Historyradio.org: So if you were to succeed immensely in one of your pursuits, which one would it be? Would you rather be a DA, a musician or a writer full time?

“In a successful band, releasing a new album every three years and touring for a full year, and then publishing a new novel in the spare year.”