Gunnar Staalesen on his writing life and his movie franchise

Crime novelist Gunnar Staalesen is one of few Norwegian authors who have managed to establish a viable movie franchise based on a fictional gumshoe. He has even ventured into comic books. Varg Veum, the hard-boiled P.I., is now a household name in Norway, and Staalesen’s books have been translated into twenty languages. Staalesen joins us at historyradio.org to reflect on his long career, his movies and that strange and fashionable term «nordic noir».

Historyradio.org: According to Wikipedia you introduced social realism in Norwegian crime fiction, but how realisic is your hero, Varg Veum, really?
Gunnar Staalesen: I was one of many who followed the lead of the Swedish writers Sjöwall & Wahlöö and began writing crime novels that were more «realist» than previous publications which placed more emphasis on entertainment. Writers like Jon Michelet and I described realistic milieus and conflicts from Norwegian every day life in the 1970s. We zoomed in on individuals and settings in order to make them come alive and appear as vivid and believable to the readers as possible. Varg Veum’s profession, that of a PI, is of course not very realistic, at least not in Norway of the 1970s, and he solves puzzles that never would have occurred in real life. This is the entertainment part of the novels. But the conflicts that form the backdrop of the books, the environments and the people I describe, are all very realistic. In this way, I suppose there is some truth to wikipedia’s claim.

Historyradio.org: How important is the city of Bergen in your books?
Gunnar Staalesen: Almost all crime fiction has an attachment to particular cities or settings. Sherlock Holmes and London. Maigret and Paris. Philip Marlowe and LA. When I began writing my series, it seemed natural to place Verg Veum in Bergen, which after all is my home town, and which I know by heart. Bergen is also a spectacular and visual city, surrounded by mountains 400-600 meters tall on several sides, as well as a fjord that leads to an ancient port with buildings that date back to the 11’th century. The weather is perfect for a noir city, lots of rain, dark winter evenings, narrow alleyways and streets, cobblestones- in short, a city with plenty of atmosphere. Bergen has been essential as the backdrop for the entire series of 19 books published in Norway. That is, book number 19 will be published in September! 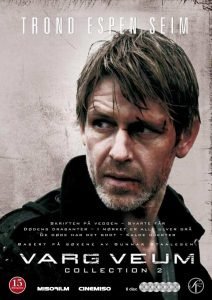 Historyradio.org: Your books have been translated into many languages and almost all the Veum novels been filmed? Are you a visual writer, do you think?
Gunnar Staalesen: Yes, I have always regarded myself as a visual writer. I try to portray settings and people the way they would appear to readers, as clearly as if they were facing them or visited the places I describe. I do hope the translations do justice to this. The movies that have been based on my books only loosely follow the original stories. Some only share the title with the original novel. But the cinematography offers stunning views of Bergen, at least in most of the films.

Historyradio.org: Which of the Veum films is your favorite?
Gunnar Staalesen: I don’t know if I have a favorite among them. They are pretty uneven and quite different, depending on various script writers and directors. But most of them have worked well as movies, and have been popular both here in Norway and abroad.

Historyradio.org: You started out as a so-called «serious» writer. What made you change to genre fiction?
Gunnar Staalesen: I guess it was fate. After my first two books, there was a period when none of my works would be accepted by a publisher, neither my novel nor my collection of short stories. It was at this time that the opportunities offered by crime fiction became apparent to me, especially after I had read Sjöwall & Wahlöö, Hammett, Chandler and Ross Macdonald. My Norwegian publisher, Gyldendal, organized novel writing competition in 1974. I wrote a script which I submitted, and it won second prize. But already during the writing of that text I thought: I have finally found my place in the Norwegian literary scene. A crime novelist I am, for god or bad. Since then there has been no looking back.

Historyradio.org: Are you a meticulous plotter or do you write on instinct? Veum seems to stumble upon the solution sometimes, like Philip Marlowe?
Gunnar Staalesen: I am not a thorough plotter, but I sketch out the main storyline quite clearly, what the puzzle should be and who is guilty. But then all sorts of things happen during the writing process. Characters you thought you had pinned down change, new ideas emerge, you notice connections between different aspects of the plot and new dimensions to the story. But usually, I end up where I originally intended. Veum applies his intuition, of course, like all detectives, with the assistance of the writer. Sherlock Holmes may not have solved a single crime if it were not for Conan Doyle.

Historyradio.org: The most flattering thing for a writer is to have his characters and fictional universe outgrow their creator. Will you kill off Veum in the end, or will you allow him to grow, perhaps into a franchise without you?
Gunnar Staalesen: I will write about Varg Veum as long as I live. I don’t care much for writers who adopt the literary creations of others and write new stories about old characters. You can never beat the original. As a matter of principle, I feel that authors should have the imagination to create their own characters. In other words, I suppose Varg Veum will follow me to my grave, at least his fictional incarnation. Yet, he might still find a life beyond death in films and on TV, and hopefully in new editions of my novels.

Historyradio.org: What is your take on the phenomenon «Nordic Noir» ? Why do you think Scandinavian crime novels for a while enjoyed such immense popularity?
Gunnar Staalesen: It is difficult for some one who is himself a part of the «nordic noir» craze to answer this question. We must assume- or at least hope- that some of the popularity is simply due to the high quality of the works produced. Sjöwall & Wahlöö initiated a a golden age of Nordic Crime fiction, and here I will include all my colleagues, both Swedish, Danish, Norwegian, Icelandic and Finnish, who all form part of this new wave. We have seen a period with a lot of great novels, and, in all modesty, I hope I have made a small contribution. The term “nordic noir” is somewhat deceptive as it includes a wide range of books, anything from classic who-done-its to police procedurals, espionage thrillers and PI novels. But they originate in the Nordic countries, and are indebted to both the ancient Icelandic Sagas, as well as Conan Doyle, Agatha Christie, Raymond Chandler, Simenon and all the other great names from foreign countries.

Historyradio.org: Is there a particular Norwegian way of writing crime fiction?
Gunnar Staalesen: No, I don’t believe there is. But there is much more scenery in Nordic literature, since we live so close to it, and politically most of us are social democrats. But apart from this, I don’t think we are much different. That is the great thing about crime fiction. As a genre, it is international, and easily recognizable, whether it is written in Japan, Brazil, England or Norway.

Historyradio.org: You were once rejected by Norwegian publishing legend Brikt Jensen. Do your editors still give you a hard time, even now that you are a veteran, so to speak?
Gunnar Staalesen: Well, it wasn’t Brikt Jensen who rejected me. He was head of the publisher, and it was probably his consultants that rejected some of my early work. Actually, I have never argued with my editors. We have had a great partnership all these years. They offer sound advice and input, and I benefit greatly from this, even now as a veteran writer.

Historyradio.org: What is the best crime novel you have read?
Gunnar Staalesen: How Like An Angel av Margaret Millar.