Literature and Reading in North Korea 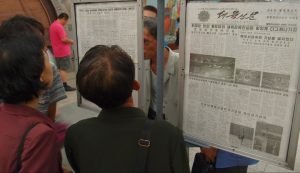 Let us for a moment forget about big politics. In fact, let us forget about socialism or any other political doctrine. In a series of articles on the Hermit Kingdom we have previously looked at animation and comedy in the country. Today we had a final chat with professor Immanuel Kim, a specialist on North Korean literature and fiction, in order to find out more about the pastimes of ordinary citizens behind the Iron Curtain.

Historyradio.org: Do we know anything about the reading habits of ordinary people in North Korea?
Professor Immanuel Kim: North Koreans read extensively, in subways, elevator, buses, restaurants, etc. Whenever I go to North Korea, I see people reading. The trend today is to read off their smart phones. I see them watching things on their phones. They used to pass out newspapers for free or for a low cost, but because of paper shortages, they have kiosks for people to read the newspapers. But again, most people today read newspaper articles on their phone.

Historyradio.org: Are there any official contacts between writers in North Korea and international Writers’ organizations?
Professor Immanuel Kim: Not that I know of. Some writers attend international colloquium, conferences, or seminars that I’ve heard writers would attend. But I don’t know how often they do that.

Historyradio.org: Only members of The Writers’ Alliance are allowed to have their works published in North Korea. Do they still produce significant literature?
Professor Immanuel Kim: Amateur writers begin by publishing their works through the local newspaper. Once they become more recognized, they can join the Writer’s Union in Pyongyang. There are local Writer’s Unions in every province. Amateur writings are basic, unpolished, unsophisticated, and amateurish.

Historyradio.org: In Western literature we have had literary schools such as modernism, realism, naturalism and so on. Are there any North Korean equivalents to these literary movements?
Professor Immanuel Kim: NK has had socialist realism as their driving force. Although they say that they still adhere to socialist realism, the trend has nearly disappeared. Writers have dabbled with other literary schools such as realism or naturalism, but modernism is something that Kim Il Sung criticized, so they don’t write about that.

Historyradio.org: Norway has Ibsen, Britain has Shakespeare, France Voltaire, what sort of classic writers do the North Koreans value?
Professor Immanuel Kim: This is rather debatable, but I would say Han Sorya, Kwon Chong-ung, Ri Chong-suk, Paek Nam-nyong, and many more.

Historyradio.org: Who is your favorite North Korean writer, and why? ”
Professor Immanuel Kim: My favorite writer is Paek Nam-nyong because he writes about family life in NK and the problems we all face in the family. I can connect with his style and his writings. I met him in NK and published a short interview in the Journal of Korean Studies. Look it up.

This was the last of three articles on historyradio.org on the culture and literature of North Korea.