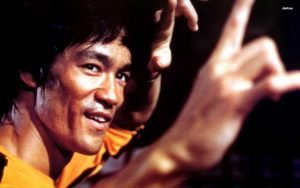 What does Bruce Lee mean to the world, or maybe I should ask myself what does he mean to me? Bruce Lee means a lot of things to a lot of people around the world and that is why he is an icon today across the globe. His legacy has grown bigger and bigger for each year and people are still mesmerized by his skills, charisma and determination that shined so bright throughout his short life.

When I was growing up as a kid in Denmark and Norway, I had very few role models I could relate to, and the moment I saw Bruce Lee in action on the big screen for the first time, I was just so captivated by his persona, what he stood for and how on earth he could beat 50 guys at the same time. But Bruce showed it was possible and how I could be done and led the way. He was the first real martial artist action star the world had ever seen, there was no one before him and there hasn’t been anyone bigger than him after he passed away in 1973 at the age of 32. He put martial arts on the map and gave it a face and a purpose and in many ways made it universal. So many of todays action stars like Jean Claude Van Damme have said that after they saw Bruce Lee in Enter the Dragon, they wanted to become an action star. Bruce defined and changed a whole genre, came up with his own martial art style (Jeet Kune Do) and left a mark on the world that can never be replaced. He also helped change the way Asians was looked upon in movies.

I remember when I was 8 years old, living in Copenhagen being at an Eritrean party. I had helped a friend of mine earlier that day so he gave me two Bruce Lee postcards as a gift, it was the famous picture of Bruce Lee holding his nun chakus. Unfortunately that night I have had a lot of soft drinks, so I had to go to the bathroom, so I put the postcards underneath my seat and rushed to the bathroom and when I got back my postcards where gone. I was so angry, that I almost started to cry and I walked up to everyone at the party asking them if they had seen my Bruce Lee postcards, but no one has seen them. I was devastated and my parents tried to comfort me by saying don’t worry, something bigger and better will come one day. 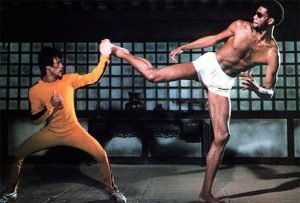 A few days later a friend of mine came to cheer me up with a Bruce Lee movie called “Game of Death,” which I had never seen before. The moment I saw Bruce Lee in his famous yellow and black tracksuit in the movie, I feel in love with it right there and then. It looked so amazing on him. I begged my parents to go and buy that tracksuit, so I could practice martial arts and be just like him. So we went to almost every store that were in Copenhagen looking for that famous tracksuit to no avail. No store had it and this was way before E-bay. 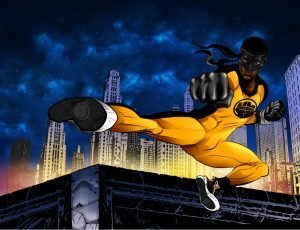 When I got the idea to create my own superhero called The Urban Legend, I named him after Malcolm X, my father Tzegai and Nelson Mandela, but I also put some reference to Bruce Lee in it. When I came to the stage where I had to get my superhero his own suit, Bruce Lee´s famous yellow and black tracksuit instantly came to mind, so I choose that as a tribute to Bruce Lee (and for making up for a lost childhood). In one issue of The Urban Legend I have used a Bruce Lee quote and you see Bruce Lee posters hanging on the wall of the superhero.

To me Bruce Lee symbolizes power, love, strength, self-improvement, dignity and all the good values we want see in our fellow human beings.